Other Publications in Textile History

From time to time the Fund, either independently or in conjunction with a major publishing house, organises and/or sponsors the publication of other major works in textile history. 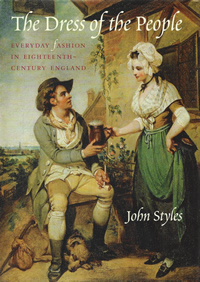 THE DRESS OF THE PEOPLE: EVERYDAY FASHION IN EIGHTEENTH CENTURY ENGLAND by John Styles

Material things transformed the lives of ordinary English men and women between the restoration of Charles II in 1660 and the Great Reform Act of 1832. Tea and sugar, the fruits of British mercantile and colonial expansion, transformed their diets. Pendulum clocks and Staffordshire pottery, the products of British manufacturing ingenuity, enriched their homes. But it was in their clothes that ordinary people enjoyed the greatest transformation in their material lives. In calico gowns and muslin neckerchiefs, in wigs and silver-plated shoe buckles they flaunted the fruits of the nation's commercial prosperity. This book retrieves the unknown story of ordinary consumers in eighteenth-century England and what they wore. John Styles reveals that ownership of new fabrics and new fashions was not confined to the rich. It extended far down the social scale to the small farmers, day labourers, and petty tradespeople who formed a majority of the population. Styles reveals that humble men and women could be beneficiaries of the new kind of commercial society that emerged in eighteenth-century England, and not just its victims. He does so by focusing on three issues: the clothes they wore, the ways they acquired them, and the meanings they attached to them. The clothes worn by ordinary men and women were not all basic or utilitarian. What they called their best clothes reflected the broad trends of high fashion, although they were not worn simply to emulate the lifestyles of the rich. Fashionable display by ordinary consumers was rooted in a world of popular custom, of fairs and holidays, of parish feasts and harvest homes. Popular custom and popular consumerism were allies, not enemies. This inventive and lucid book sheds new light on topics as diverse as crime, authority and retailing in eighteenth-century Britain , as well making a major contribution to broader debates around consumerism, popular culture and material life.

The Cambridge History of Western Textiles

This is a definitive history, which brings together and extends current knowledge of the production and uses of textiles through the eyes of archaeologists, economic and social historians, historians of fashion and the history of dress, and museum curators familiar with surviving artefacts. Processes and technical terms are explained carefully, while the role and impact of textiles in western economies and societies are examined. In sum the book offers an authoritative account of three thousand years of the production and consumption of textiles in the Western world.